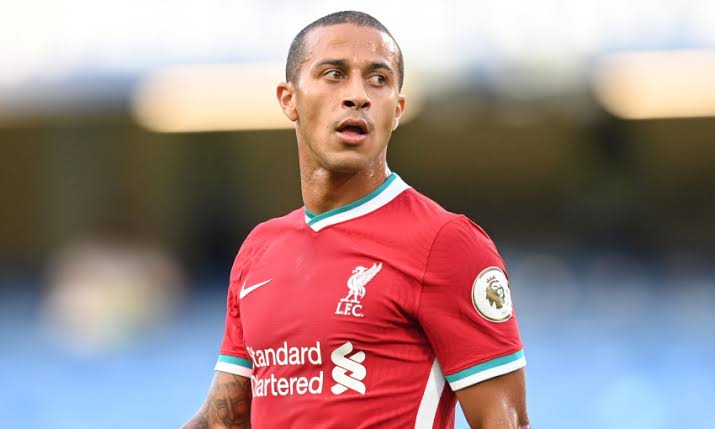 Liverpool's home form has been nothing to write about and with the season reaching its tail end, they increased the tempo due to the fear of missing out on Champions League football. Liverpool played amazing football when they hosted Southampton on the night. It was also Thiago Alcantara's first goal for Liverpool and it was enough to seal the win after a nervy ending before his goal.

Mane had his first attempt at goal when he produced a lovely shot just outside the box but his effort went flying over the bar. Salah had his moment too but Forster saved his effort at the near post.

Forster was at his brilliant best yet again when Mane laid a short pass after holding off his markers to Jota. Jota danced his way into the box and produced a lovely strike which the goalkeeper saved. The resulting corner was taken and Wijnaldum came so close to scoring as he was denied yet again as he was aiming for the top right hand corner.

Southampton had their own chance too when Adams was brilliantly fed a pass. The goalkeeper quickly raced out of his goal to close up on Adams who tried to chip the ball but the body of the goalkeeper already covered the ball. What a huge let off that was for Liverpool.

Never to be denied for too long, Salah found Mane with a lovely cross into the box in the 31st minute. His header found the back of the net to calm their nerves, 1-0. Not too long after, Jota had a strike at the near post from a tight angle and yet he was denied by Forster again.

Southampton had another chance when Adam found Diallo. Diallo's shot was direct and not directional which made Alisson push it away for a corner kick. Alisson performed another horror act when he misplaced a pass and fed Adams. Adams took his shot quickly but Alisson was quick to react and saved it.

Mane thought he got his second of the night when his half volley right inside the box went in but he was flagged for offside. In the 90tj minute, Thiago sealed the victory and banished any hope of a draw for Southampton when he buried a brilliant curling effort into the right bottom corner of the net to register his first goal.

The game ended 2-0 with a Liverpool's win at Anfield. The race for top 4 intensifies and it would take just a tiny margin to see those who will miss out of the UEFA Champions League. Good attacking display from Liverpool and an important win ahead of their clash with rival, Manchester United - a game that was postponed due to United's fans protest on the ground.

blurtsport blurtafrica football blurtit writing
last month by olawalium
21.92 BLURT
3 votes
0 22
Authors get paid when people like you upvote their post.If you enjoyed what you read here, create your account today and start earning FREE BLURT!