Guard Of Honour For Conte And His Lads. 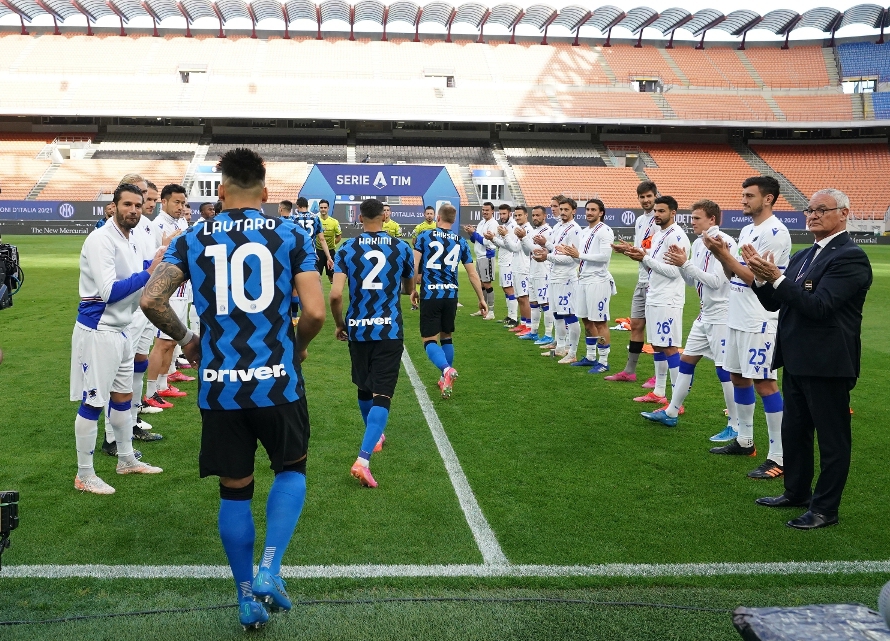 Inter Milan was given a guard of honour as Serie A champion by the team(Sampdoria) that handed them their last league defeat. Inter duly exerted their payback with a commanding 5-1 win at the Giuseppe Meazza. It's Inter's 1st title since a certain Jose Mourinho led Inter to a historical tremble that includes a domestic double(League and Cup) and the UEFA Champions League in 2010.

The Nerazzurri were confirmed as champion last weekend after their 2 nil win over Crotone and Atalanta's failure to win at Sassuolo(playing out to a 1 all draw). It meant the chasing pack of Atalanta, AC Milan and Juventus could no longer catch up with Inter, ensuring Inter's 19th Scudetto title, 1 ahead of city rival AC Milan on 18 titles and a long way behind Juventus 36 titles.

Who could have wrestled the Scudetto out of the stranglehold of The Old Ladies if not the man that brought in the 1st 3 of Juventus' 9 consecutive Scudetto's? It is a success story befitting of Lecce born Inter Milan manager Antonio Conte.

Going back memory lane, before Conte was appointed Juventus manager in May of 2011, Juventus had played 2nd fiddle to the Milan clubs for 8 straight seasons(2003/04 to 2010/11) including spending the 2006/7 season in the Seria B after a corruption scandal that rocked Juventus and the league in the season before. Conte came in and immediately turned Juventus fortune at the first time of asking, winning all Serie A titles in the 3 seasons(2011/12 - 20013/14) spent before his unceremonial departure in 2014.

The former Juventus manager was brought in by Inter Milan last season to reclaim the Italian Serie A from his old employer and he(Conte) was within a whisker of winning the title in his 1st season, losing by a point to Juventus having led the table for a long period of the season. However, Inter's newfound drive and purpose were there for all to see.

Inter Milan has found her lost mojo under Conte. The team's mental strength, rallying cries, the high 5s, knuckles, hugs and galvanization during and after every match were all Conte's imprint on the team. He(Conte) brought in outcasts from Manchester United and breathe new life into them, the likes of Romelu Lukaku and Alexis Sanchez has been reinvigorated under Conte.

How Conte has perfected the 3-5-2 formation to bring the best out of his players deserves commendation. He also managed to held unto much-sort after players such as striker Martinez Lautaro and defender Milan Skriniar

Antonio Conte's lads top the Serie A since their 3-1 victory over Lazio in February and remain top for much of the season after showing an impressive level of consistency that their rivals were unable to replicate, remaining unbeaten in the league since their 1-2 loss at Sampdoria on January 6th, winning 15 league matches and drawing 4.

blurtsport atomy zzan r2cornell blurtafrica
last month by peman
0.70 BLURT
2 votes
0 22
Authors get paid when people like you upvote their post.If you enjoyed what you read here, create your account today and start earning FREE BLURT!