Israel destroys home of most senior Hamas leader in Gaza.

The Israeli military said it destroyed the home of Hamas’s top leader in Gaza amid its ongoing bombardment of the Palestinian enclave.

The attack targeted the homes of Yehiyeh Sinwar, the most senior Hamas leader in Gaza, and his brother Muhammad, another senior Hamas member. An AFP news agency witness confirmed Sinwar’s house had been hit.

On Saturday, Israel bombed the home of Khalil al-Hayeh, a senior figure in Hamas’s political branch, saying the building served as part of the group’s “terrorist infrastructure”.

There were no immediate reports if any of the targets were killed. Members of Hamas have largely gone into hiding since the most recent escalation, which began on Monday.

“The resistance will not give in and will always be on top of the mountain, carrying the sword and shield for Jerusalem and Al-Aqsa, God willing,” he said. “This is the besieged Gaza … 15 years under siege from every direction, this is Gaza today.”

Hamas and Islamic Jihad armed groups acknowledged 20 fighters have been killed since the fighting broke out, while Israel said the number is higher.

Continued bombardment
More than 170 Palestinians, including at least 47 children, have been killed in the Gaza Strip in seven days of Israeli attacks. In the occupied West Bank, Israeli forces have killed at least 13 Palestinians.

Israel has reported 10 dead, including two children, from the thousands of missiles fired by Hamas, many of which were intercepted by Israel’s Iron Dome air defence system.

There has also been widespread inter-communal violence across Israel amid the escalation.Early on Sunday, Israeli warplanes struck several buildings and roads in central Gaza City. The airstrikes punched a crater that blocked one of the main roads leading to al-Shifa hospital, the largest medical centre in the Strip.

The head of internal medicine at the hospital was also killed in Israeli attacks, according to Gaza’s ministry of health.

Since the conflict began, Israel has levelled a number of Gaza City’s tallest office and residential buildings, alleging they house Hamas military infrastructure.

On Saturday, Israeli missiles demolished the 11-story al-Jalaa Building, which housed the offices of Al Jazeera and the Associated Press. 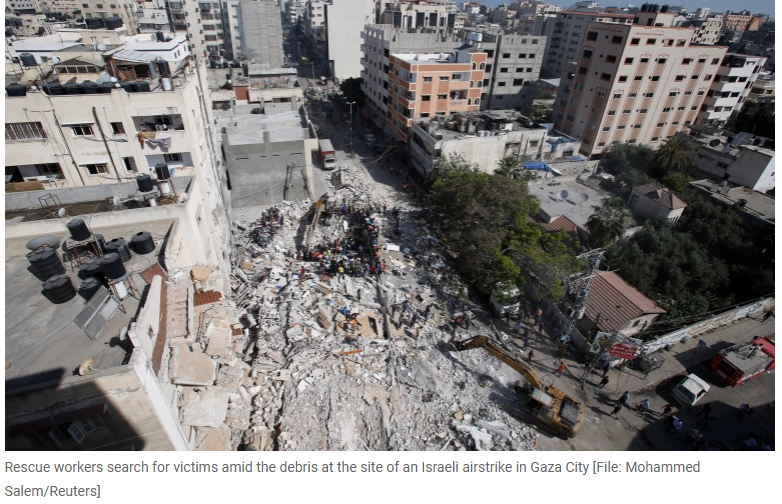 Hamas began firing rockets at Israel on Monday following crackdowns on protesters opposing the expulsion of Palestinian families from the Sheikh Jarrah neighbourhood in East Jerusalem and subsequent raids at the Al-Aqsa Mosque.

The United Nations Security Council meets later on Sunday to discuss the worst outbreak of Israeli-Palestinian violence in years.